Mural of Lord Rama in Iraq

Images of Lord Rama Found on the High Mountains of Iraq 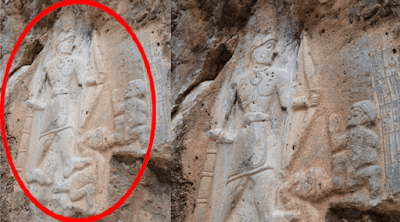 Lord Rama is worshiped in the country of India. There is immense faith in India about Lord Rama. The Indian delegation to Iraq this year got to see a mural dating back to 2000 years ago. The Ayodhya research institute claims to have the image of Lord Rama. This mural was found in the Darband-e-Berula rock on the route from the narrow pass through the Horen Sherwan region of Iraq. Ayodhya Research Institute director Yogendra Pratap Singh says that this is the image of Hanuman. He said that the king and monkey made in the picture are Lord Ram and Hanuman. 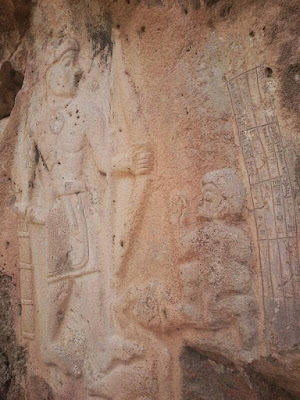 In June this year, a delegation led by Indian Ambassador Pradeep Singh Rajpurohit went to Iraq. For this, the Ayodhya Research Institute under the Department of Culture requested. The delegation also included an Indian diplomat at the Abril Consulate, Chandramouli Karan, the historian of the University of Sulaimaniya and the Iraqi governor of Kurdistan. The Iraqi archaeologists and historians are denying it to be the image of Lord Rama. Iraqi scholars state that the mural depicts Tadurni, the chief of the hill tribe. He said that the missing link needed to be found to prove it.

Among the murals found by the Archaeological Department, a king with a bare chest is shown. A bow and a sword are placed in the belt of his waist, which is armed with arrows on the bow. Not only this, in addition to this image, a second image is also seen with the palms. Ayodhya research institute director Yogendra Pratap Singh claimed that the mark of God in Baitullah Pass is a clear proof that Rama is not just in stories. This delegation has collected pictorial evidence to make a detailed study of the relationship between Indian Mesopotamian cultures. 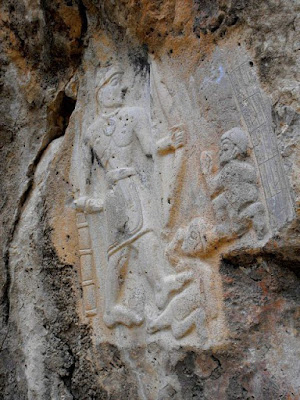 Singh claimed that this was the first official attempt to establish links between the Indus Valley and Mesopotamia's civilizations. Citing various references, he stated that Lower Mesopotamia was ruled by Sumeria between 4500 and 1900 BCE. Evidence that it came from India and was genetically associated with the Indus Valley Civilization. It is proposed that murals of different places will be brought under one roof in Ayodhya. The director of the institute said that the mark of Ram is in different parts of the world. The culture department of UP has also prepared a proposal to get a replica of the same mural made in Ayodhya.

It is vital to understand the similarities between the Yazidis of Iraq and the Hindus of India to accept the impact of Hinduism in the region. You can find the list of the similarities here:

Posted by Man U at Saturday, November 30, 2019 No comments: Links to this post 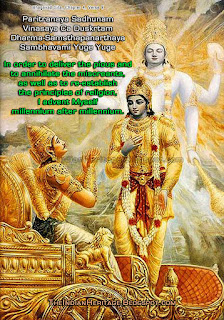 
TRANSLATIONS
Paritranaya - for the deliverance;
Sadhunam - of the devotees;
Vinasaya - for the annihilation;
Ca - also;
Duskrtam - of the miscreants;
Dharma - principles of religion;
Samsthapana-arthaya - to re-establish;
Sambhavami - I do appear;
Yuge Yuge - millennium after millennium.

TRANSLATION
In order to deliver the pious and to annihilate the miscreants,
as well as to re-establish the principles of religion,
I advent Myself millennium after millennium.


According to Bhagavad-gita, a sadhu (holyman) is a man in Krsna consciousness. A person may appear to be irreligious, but if he has the qualifications of Krsna consciousness wholly and fully, he is to be understood to be a sadhu.


Duskrtam applies to one who doesn't care for Krsna consciousness. Such miscreants, or Duskrtam, are described as foolish and the lowest of mankind, even though they may be decorated with mundane education; whereas another person, who is one hundred percent engaged in Krsna consciousness, is accepted as sadhu, even though such a person may neither be learned nor well cultured.

As far as the atheistic are concerned, it is not necessary for the Supreme Lord to appear only to destroy them, as He did with the demons Ravana and Kamsa. The Lord has many agents who are quite competent to vanquish demons. The Lord also descends to appease His devotees, who are always harassed by the demons. The demon harasses the devotee, even though the latter may happen to be his kin. Although Prahlada Maharaja was the son of Hiranyakasipu, he was nonetheless persecuted by his father; although Devaki, the mother of Krsna, was the sister of Kamsa, she and her husband Vasudeva were persecuted only because Krsna was to be born of them. So Lord Krsna appeared primarily to deliver Devaki, rather than kill Kamsa, but both were performed simultaneously. Therefore it is said here that to deliver the devotee and vanquish the demon miscreants, the Lord appears in different incarnations.
Posted by Man U at Wednesday, November 20, 2019 No comments: Links to this post

Posted by Man U at Wednesday, November 13, 2019 No comments: Links to this post

Recently the whole world was shocked with claims that a Vishnu temple was found submerged under water in Bali. And that the temple was built 5000 years ago. It then later submerged  due to volcano eruption and the rising of sea water. Many Indian and Hindu based organisations and individuals start making videos and claims about this without any evidence at all. 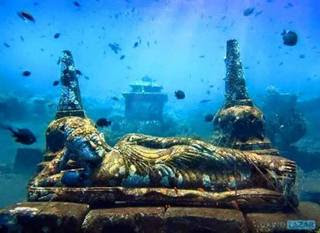 So how true is this Submerged Vishnu Temple?
After a thorough online research, one will understand that this claim is actually a hoax. The “temple” was actually constructed recently as part of an artificial reef creation project. Coral and other sea life can anchor onto vertical structures placed on the sea floor, creating important marine habitat. 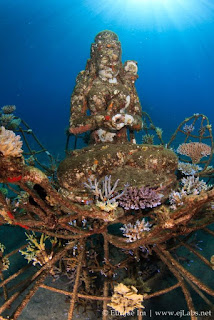 The temple or more precisely a "Garden" was built in 2005 in Bali to act as stimulus for coral breeding and also as tourist attraction.
It was not built 5000 years ago as claimed and definitely not a theme park as claimed by some foreign medias.

Sea Rovers Dive Center has constructed several artificial reefs with funding from the Australian Agency for International Development. They named the site temple “Taman Pura” or temple garden. This is perhaps the most interesting man-made reef to dive on in the area. 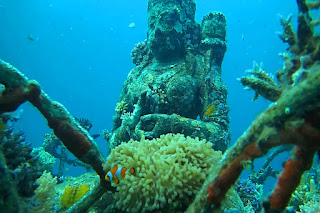 The place is known as Underwater Temple Garden, is located Pemuteran, Bali, Indonesia also houses the statues of Buddha, Laxmi, Saraswati under its waters. Despite being the largest Muslim country in the world, Indonesians love respect their ancient beliefs and make sure the belief system of their ancestors lives on. There are so many ancient Hindu and Buddhist temples found in Indonesia every year but this is not one of them.﻿

The initial project was created 29 meters below the ocean surface. This it just slightly below the limits of recreational diving depths, but close enough to descend for a good look. A second site at only 15 meters has been created nearby so that less experienced divers can enjoy the amazing experience of diving to view ancient-looking Hindu and Buddhist statues. The first site has around a dozen large stone statues sitting on the ocean floor and a 4 meter tall temple gateway. You can see more statues at the second site. 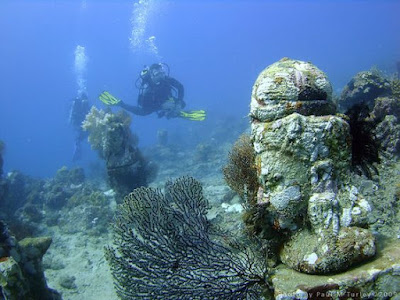 In addition to Taman Pura, there are many other dive sites in the clear blue waters off the coast of Bali. Pulau Menjangan, Amed, and Padangbai all have shallow dive sites that are suitable for beginners. Nusa Penida, Nusa Lembongan, and Candidasa’s dive sites are generally deeper or have more current, making them more suitable for experienced divers.

This site is a definite "MUST VISIT" site that one should never miss when visiting Bali.
Posted by Man U at Sunday, February 24, 2019 No comments: Links to this post