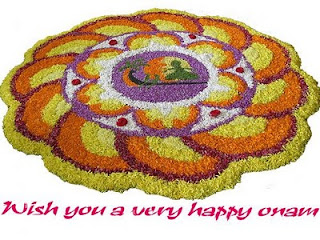 Wishing You A Happy Onam Festival 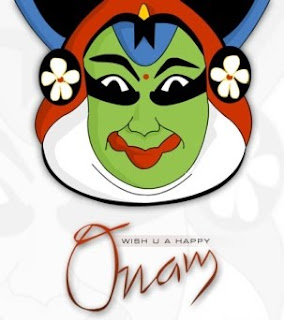 Kathakali Dancer, a common symbol representing the State of Kerala, India
Thiru Onam or Onam is a festival dedicated to the great King Mahabali who ruled the hearts of the people of Kerala. It is a major festival in Kerala which marks the occasion of return of the benevolent and revered king back from netherworld to review the welfare of the subjects he one time ruled on.
Onam, rich in culture and heritage, is celebrated with grandeur and customs galore in the month of ‘Chingam’ of the Malayalam calendar, Kollavarsham.
Cities like Trivandrum, Thrissur & Kottayam would be adorned with decorations & fanfare. The State Government announced ‘Tourism Week’ around this time. What better than caparisoned elephants, glittering fireworks, events, carnivals & the famous Kathakali dance to show your point of a miraculous & joyful inheritance of culture.
The History
The story goes that a long time ago, Kerala had a wise and judicious king in the Asura (Devil), Mahabali. He was not only a benevolent ruler but cared about his subjects with an fatherly devotion. His popularity though, earned the ire of the Gods who feared their thrones and evoked concern from the God mother, Aditi. Hence, Lord Vishnu seeking to remove Aditi’s worries took the avatar of Vamana (a Dwarf) and landed at a Yajna being held by the Devil king Mahabali who was impressed by Vamana and granted him a single wish ignoring the warning by his preceptor, Shukracharya.
The king however, did not budge from his stance since he considered going back on a promise to be a great sin. Vamana wished only for 3 paces of land. Once his simple wish was granted by the king, Lord Vishnu assumed his true form. With one step owned the sky and in the next he conquered the netherworld. Everyone was trembling in anticipation of Earth’s destruction with the Lord’s final step but the tender & loving king offered his head in lieu. He bore the brunt of the last step to be pushed way down to the netherworld but Lord Vishnu couldn’t ignore the sacrifice & honesty which distinguished the great emperor Mahabali. He was allowed to visit his people once a year to ascertain their well-being & then depart in peace to his abode in the netherworld. 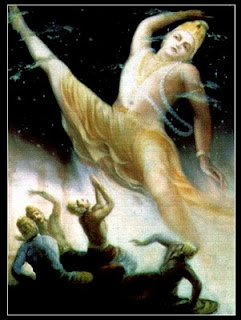 Lord Vishnu taking his stride from Netherworld to the Sky
It was said that Lord Vishnu also wanted to free Goddess Lakshmi who was imprisoned by King Bali. One should not confused this occassion with Deepavali. 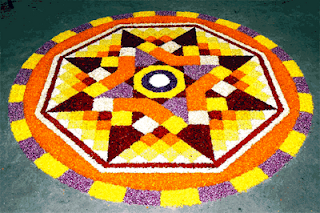 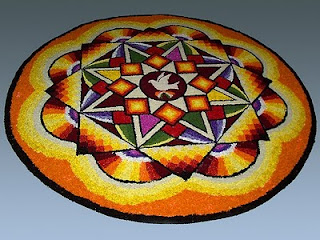 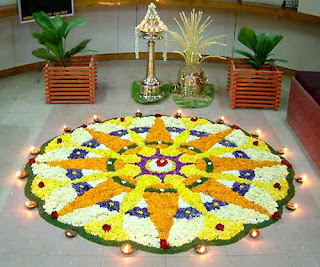 Different designs of Pookalam
The actual incident is celebrated as the Deepavali festival. Where as the Onam festival is celebrated during when the king visit his subjects during his visit from his netherworld. The celebration is performed to show him the that his sacrifice is not in vain. 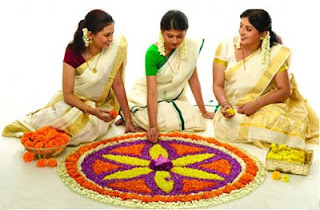 Girls designing Pookalam
The Festivities and Cultures
The vanquished king Mahabali is first offered a flowery welcome with every house decorated with a floor decoration called Pookalam. The courtyards, freshly plastered with cow dung for purification purposes, also contain two earthen mounds symbolising both Mahabali and Lord Vishnu. The main Onam’s highlight is its classic feast served on Banana leaves called Ona Sadya. A sweet smelling dessert called Payasam is well accepted by people of all level of society. 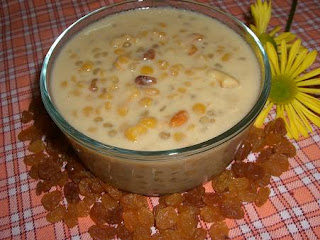 Payasam
Posted by Chakravarthy at Monday, August 23, 2010 No comments: Links to this post