The Story of the Creation

This is the eternal spiritual world. At the top we see Krishna, the Supreme Personality of Godhead, a transcendental cowherd boy at play with His topmost devotees. These devotees are so totally in love with Him that they even forget He is God. Being God, He can expand Himself into unlimited forms without diminishing Himself. Therefore we see, in the middle, a milk-white form of Krishna wearing blue instead of yellow. This is Balarama, Krishna’s first expansion who plays as His brother, another cowherd boy. After Balarama come the Vishnu or Narayana forms, manifested for those who do not want to forget that He is God, and who prefer the more formal worship of this majestic four-armed form. But some become envious of God’s position and want one just like His. 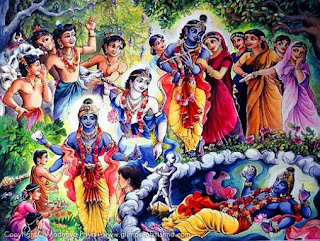 They wish to be gods themselves instead of serving God. Just to give these souls a place to try to fulfill their desires, and to ultimately learn that such a choice cannot bring happiness, the Supreme Lord again expands Himself as Maha-Vishnu (Great Vishnu). Maha-Vishnu lies down in a darkened part of the spiritual world, in the Causal Ocean, which is made of the undifferentiated material energy. There He begins to create the material world. 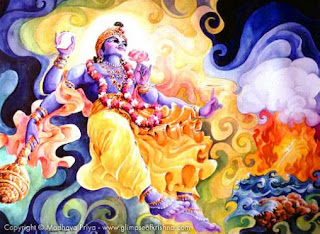 In the Causal Ocean, the Supreme Lord first separates the qualities of the material elements (ether, air, fire, water, and earth) by His glance. 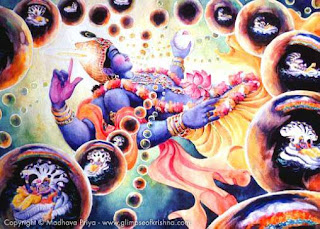 The Supreme Lord, in His exhalation, breathes out the universes. It is said there are millions of universes, and each one is covered by layers of the material elements. The Lord next expands Himself again, to enter each universe. 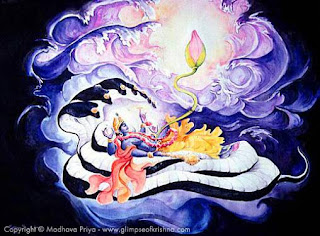 Within each universe, all is dark. The Lord lies down in the waters of devastation, on a bed formed by His servant, Shesha-naga, who is actually another type of expansion. From His navel grows an effulgent lotus, whose light dries up the waters around it. 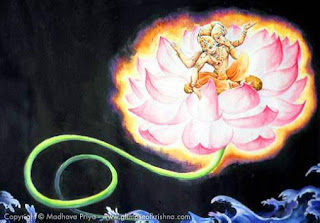 On the lotus is born Brahma, the first-born. Here, Brahma is shown trying to understand who he is, where he has come from, and what is his purpose. 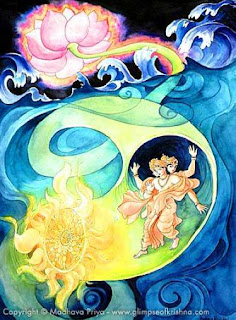 In an attempt to answer his questions, Brahma climbs down the lotus stem into the water, seeking the stem’s origin. But he is stopped by the Wheel of Time, representing Death, and returns to his seat on the lotus flower. For one hundred years he performs austerities, meditating until he finds the Lord within his heart. 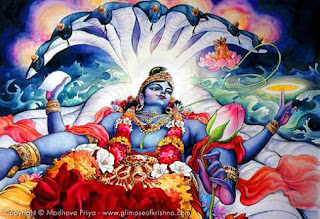 Suddenly, the Supreme Lord Vishnu appears below him, vast and more beautiful than the grandest landscape. 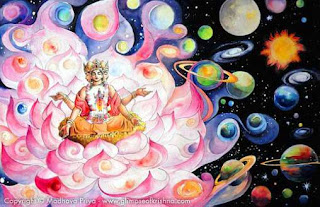 After the Lord disappears from Brahma’s sight, Brahma sees that the lotus has spread throughout the universe. Now understanding his purpose, Brahma begins the work of creation as the delegated and empowered representative of the Supreme Lord. Meditating on the Lord in his heart, he forms the planetary systems from the petals of the lotus. Next he begins to reproduce population from the different parts of his body, including his mind, feelings, and shadow, by mystic powers. He does not create the souls, who are eternal spiritual sparks from the spiritual form of the Lord, any more than he created the material elements. He merely gives them bodies formed from those material elements according to their various levels of consciousness at the time. 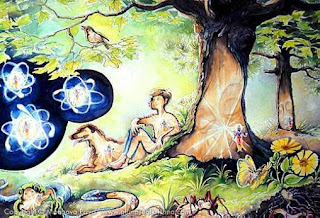 The Lord further enters His creation to maintain it. He expands Himself millions and billions of times to live in each atom and to personally accompany each soul in its journey in the material world. Besides the Lord Himself in each heart, we also see here: - the individual eternal soul, a tiny spark of spirit who is so powerful that he fills the body with consciousness and life. - the subtle body, defined as mind, intelligence, and false ego, which reflects the level of advancement of understanding of each soul. - and the gross physical body, selected to fit the nature of the subtle body. This story has a resolution. Remember, in the first painting, the rebellious soul who has rejected the service of the Supreme Personality of Godhead to seek his own supposed godhood? He has encountered much trouble and misery, some bits of happiness that are more like absence of misery, and repeated births and deaths. He has not realized who lives in his heart as his eternal friend. When he finally becomes frustrated enough to ask “why?” the Lord in his heart arranges for him to encounter a spiritual master who can guide him to surrender to Krishna in loving devotional service and return to the spiritual world.